What is Incident Response in Cyber Security

What is Incident Response in Cyber Security?

How does Incident Response Work?

Who is Responsible for Incident Response?

What is a Security Incident? 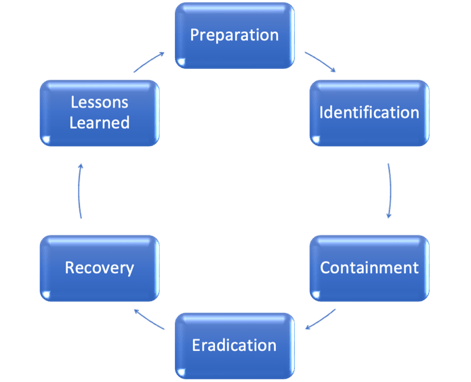 The 6 Phases of Incident Response

Various tools can be used in incident response. For this article, we advocate one particular tool – network detection and response – and explain why it is highly effective in various phases of the incident response process and, therefore, the choice of NovaIR.

What is Network Detection and Response?

Network detection and response (NDR) is a cyber security solution that is designed to detect advanced, unknown, and non-signature-based threats that have already breached a network.

In short, NDR solutions use machine learning to learn and build baselines of normal network behavior. It continuously applies AI and behavioral analytics to analyze and correlate traffic from across the network to compare real-time activity with baselines to detect anomalies. Any anomalous activity that indicates a threat is automatically responded to or flagged for further investigation.

If you’re interested in learning more about NDR, visit our NDR product page and watch a demo video to see how NDR works. The following article also provides a good explanation of NDR.

The Value of NDR in Incident Response

NDR in Threat Detection (Identification): NDR is an invaluable tool in the identification phase. On the one hand, NDR has superior threat detection capabilities. By focusing on detecting anomalous behavior as opposed to signatures, NDR is equipped to detect threats missed by traditional security tools, such as unknown and file-less malware. By correlating security events from multiple data sources, NDR makes better sense of individual events that appear innocuous to point solutions, thereby uncovering a chain of malicious activities that indicate a cyber-attack. In this sense, NDR is a holistic threat detection system that plugs the gaps between other security tools. Additionally, NDR can identify all devices connected to the network through continuous traffic monitoring. This is critical as it ensures that security incidents affecting all the organization's assets are identified.

NDR in Threat Response (Containment): NDR solutions are integrated with other security tools, such as firewall and endpoint security software, to respond to identified threats. The beauty of NDR is that it can be configured to respond automatically to threats in what is known as security orchestration, automation, and response (SOAR). Security administrators can create incident response playbooks to define how NDR and other security tools respond to specific security incidents according to the organization’s needs. This ensures that threats are contained in real time once they are identified. The Cost of a Data Breach 2022 report found that organizations that deployed AI and automation were able to contain a breach 28 days faster than those that did not, saving an average of $3.05M.

NDR in Threat Hunting (Eradication): By correlating events across the network, NDR builds an integrated evidence chain of the attack, including the root cause and how it spread in the network. This intelligence allows security analysts to concentrate their threat-hunting efforts in specific areas instead of shifting through potentially thousands of logs. NDR essentially streamlines the threat-hunting process to ensure that residual threats are found and removed promptly.

NDR in Remediation (Recovery): The integrated evidence chain provided by NDR also reveals the vulnerabilities and errors that enabled the initial security breach and the subsequent propagation through the network to occur. Security teams can then apply the required patches and make changes to configurations to prevent future compromise. In fact, NDR does not only detect vulnerabilities during incident response but also during normal operations. With good patch management, security teams can use the vulnerability information provided by NDR to patch vulnerabilities before incidents occur.

The Importance of Incident Response

Cyber-attacks are inflicting increasingly more significant financial losses on organizations. The Cost of a Data Breach 2022 report found that the global average total cost of a data breach is $4.35M. More significantly, the report also observes that organizations that have an incident response team and regularly test their incident response plan saved $2.66M on average.

Apart from financial losses, organizations that suffer from the loss of confidential data may find themselves in trouble with regulators and face heavy penalties for compliance violations. Even customers may sue the organization for failing to protect their personal data. However, organizations that provide evidence of a well-thought-out incident response plan and detailed records of the incident response process can prove their due diligence and potentially avoid or reduce its liability.

How ForeNova NovaIR can Help

At ForeNova, we understand the immense pressure of being under a cyber-attack. More so when you don’t have the right processes and people in place to help figure out what is going on and what to do next.

Enter NovaIR, ForeNova’s incident response service, designed to help our customers resolve and investigate all kinds of security incidents with speed and precision. Our incident response team is backed by over 5,000 man-hours of incident response investigation experience and fine-tuned methodologies to haul victims out of their cyber-security nightmare.

The immediate focus of our NovaIR service is to assist customers in identifying and containing the attack. We then identify the root cause or point of entry and any vulnerabilities or weaknesses associated with the attack to eradicate any remaining threats in your environment. Finally, we provide a report that covers not only incident-related information, but also recommendations on how to further improve your security architecture based on industry best practices and the results of our investigation.